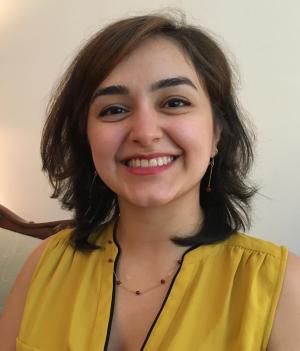 Bachelor of Arts in English Literature at University of Tehran, Iran (2009-2013)

Born and raised in Iran, Leila grew up in a country constantly in a state of flux socially, politically and economically. She witnessed the ever-growing number of refugees and immigrants, fleeing the country in search of opportunities for self-improvement and in time, found herself joining the fleet of uprooted migrants.

She came to the U.S. with the hope of utilizing her background in literature to narrate the modern day Iran, a quiet and unexplored era in comparison to the amount of works done on the country prior or at the time of the Revolution. As one of the very few international students at Chatham University’s M.F.A. in Creative Writing program, she saw her Iranian heritage in a new light; she had the power to reshape the convoluted image of Iran portrayed by the media and give voice to those unnoticed lives of Iranians, especially the women who have been pushing the boundaries of patriarchy and rising up to gain status in the society. Therefore, she began basing her creative master’s thesis on fierce Iranian women, and utilized a multiple-narrative technique to show the diversity of the country’s class divisions through different perspectives.

As a step further in her academic experience, she decided to study Iran and its citizens in the global arena. Rooted in her own aspiration for assimilation in a new social setting, she was inspired to study the labyrinth of immigrants’ process of adaptation and explore the grounds of emerging diasporas, especially the Iranian Diaspora. Her research will focus on whether or not assimilation is a more fluid transition for women rather than men, if immigrants pay homage to their culture or decide to acquire the culture and lifestyle of the target country, and how this displacement manifests itself in diasporic literature.