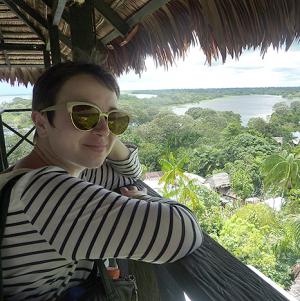 Since completing her undergraduate degree, Emelin has been very active within the Santa Barbara nonprofit community. As the Operations Coordinator at Worldhealer since it’s founding, she has been highly involved in the creation of its global awareness program in Santa Barbara, as well as laying the foundation to launch a program abroad to support underprivileged youth in South America. As the Development Associate at Pacific Pride Foundation she has promoted LGBT and HIV/AIDS programs and advocacy. She also participated in youth and professional nonprofit theatre with both Boxtales Theatre Company and Stage Left Productions.

At MAGIS, Emelin plans to focus on global governance and human rights, and political economy, particularly in Latin America and the developing world, because she strongly believes that the best way to ensure a more sustainable and just world is to address problems like lack of education or economic opportunities at their source before they can feed into exploitative mechanisms like terrorist organizations or human trafficking. In order to successfully identify solutions and build stability in a more interconnected world, we need to be able to place new approaches within a wider context.