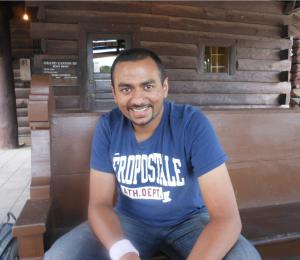 Born in the South Indian city of Chennai and raised in the Malaysian capital of Kuala Lumpur, Pratik has been deeply influenced by his intracultural and transnational encounters with postcolonial societies and their citizens in South and Southeast Asia. He completed his undergraduate degree in postcolonial ethics at Westminster College in Salt Lake City, Utah under the supervision of Drs. Leonardo Figueroa-Helland and Gary Marquardt, in addition to going through the motions of the college's honors program. As Dr. Figueroa-Helland's research assistant, Pratik studied South Asian and American indigenous peoples, movements, and philosophies for two years, conducting fieldwork in the southwestern Mexican state of Oaxaca and presenting at the 2014 Political Economy of the World Systems and 2015 International Studies Association conferences. While at Westminster, he also worked as a writing consultant at the college's in-house and community writing centers, copy-edited a textbook for one of Westminster's economics professors, and was involved in a wide-range of social, political, and service-related activities on- and off-campus.

Inspired by his undergraduate research, collaboration with numerous marginalized groups, and philosophical investments in ecofeminism, indigenous socioecology, intersectionality, and Marxist and world systems theory, Pratik is interested in exploring the impact of the modern Indian state's neoliberal policies on women, indigenous peoples, peasants, lower-caste groups, and those at the meeting points of these categorizations. He amis to show how these diverse actors have contested the hegemonic forces they confront and articulated viable communal and social alternatives to the status quo in the process; he further plans to consider avenues for solidarious collaboration among these actors and between the movements at hand and other alter-globalization actors from the Global South, especially Latin America.